What All Leaders Should Learn From Olympic Divers

Home > Forbes Articles  > What All Leaders Should Learn From Olympic Divers 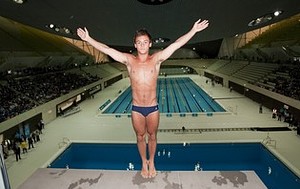 24 Aug What All Leaders Should Learn From Olympic Divers

This article is by Nathan Bennett, a professor of management at the Robinson College of Business at George State University.

We have all been entertained by the 2012 Olympic Games in London for days now, watching athletes from around the world compete in events some of which are so obscure they seem to disappear entirely from our consciousness between Olympics. One of the events I enjoy the most is diving. I don’t give it a moment’s thought outside the Olympics, but when it’s on I find it compelling.

Divers preparing for a competition have a sense of the point total they need to advance from the preliminary round to the next round and, ultimately, to place in a medalist position. They and their coaches review their program of dives, the way they’ve been diving recently, perhaps even the known tendencies of judges, and the likely programs their competitors will present. From that analysis, they determine what dives to attempt. They start from the needed point total and reason back to their tactics, all the while with an honest inventory of their capabilities in mind.

My experience suggests that leaders can learn something from this strategy. Surveys regularly show that chief executives want to drive change at their companies, that if they can’t change they’ll die, and so on. At the same time, evidence is everywhere that companies struggle to execute change effectively.

I think companies struggle with change because they attempt dives they have no business considering. Whether out of a love for Jim Collins’ “big, hairy, audacious goal” (BHAG), simple arrogance, or naiveté, executives often ask their companies to nail dives that are beyond their abilities.

Take a lesson from Olympic divers. Instead of the BHAG, think about the total number of points your company needs to generate to meet business goals with a change program. Then consider the sorts of initiatives your people have proven they can execute with the tiniest splash. Determine the surest way to earn the point total you need. Start with the end in mind, reason back, understand your limits, and plan accordingly. Just like in Olympic diving, there are many ways to earn a good score. You don’t need to earn all the points on one dive. And, as Germany’s Stephan Feck unfortunately experienced, it just takes missing one element of a dive to invite disaster. So it goes for organizations striving to make a big change, too.