Riding Shotgun – The Role of the COO

Home > Books  > Riding Shotgun – The Role of the COO

01 Jan Riding Shotgun – The Role of the COO

The role of Chief Operations Officer is clearly important. In fact, it has been argued that the number two position is the toughest job in a company. COOs are typically the key individuals responsible for the delivery of results on a day-to-day, quarter-to-quarter basis. They play a critical leadership role in executing the strategies developed by the top management team. And, in many cases, they are being groomed to be—or are actually being tested as—the firm’s CEO-elect. Despite all this, the COO role has not received much attention.

Riding Shotgun: The Role of the COO provides a new understanding of this little-understood role. The authors—a scholar and a consultant—develop a framework for understanding who the COO is, why a company would want to create this position, and the challenges associated with successful performance in the COO role. Drawing heavily on a number of first-person accounts from CEOs and other top executives in major corporations, the authors have developed a set of strategies or principles to inform individuals who aspire to serve in such a position. The executives who share their experiences in this book are from some of the most established and important companies in today’s economy: AirTran; American Standard Companies; Amgen; Adobe Systems, Inc.; Autodesk, Inc; eBay; Heidrick & Struggles; InBev; Kohlberg Kravis Roberts & Company; Mattel, Inc; Motorola; PepsiCo; Raytheon Company; Starbucks; and many others.

Order Riding Shotgun – The Role of the COO 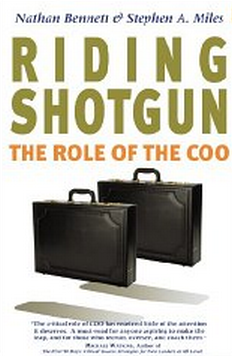